Chicken Coop Maintenance – Or… How to Scoop Poop! 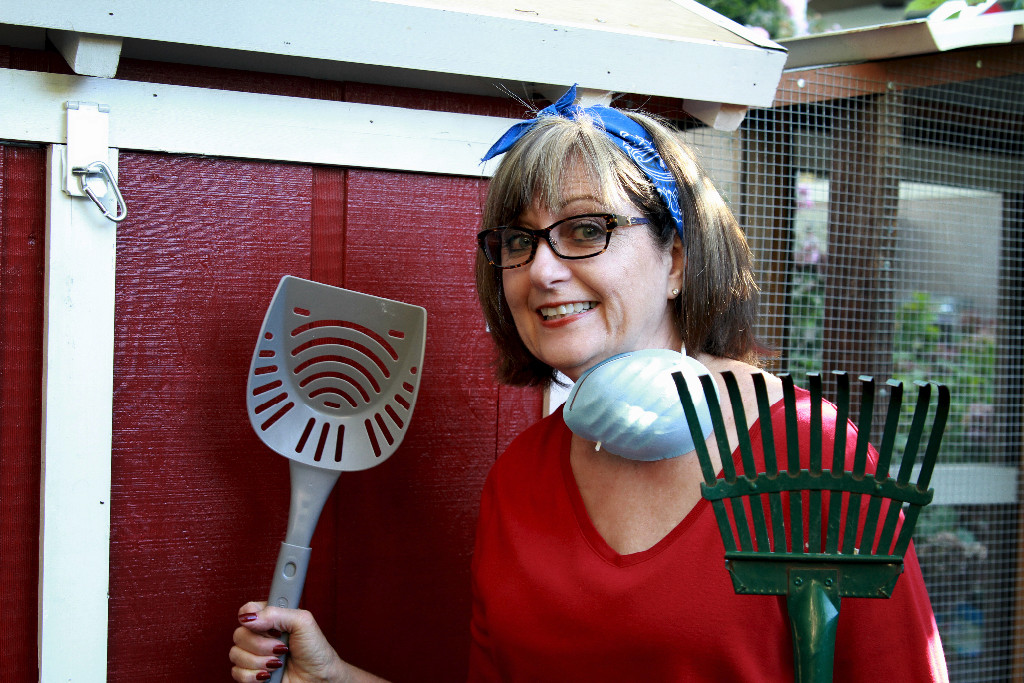 I knew this day would come. My husband made it very clear that though he would labor to build the coop of my dreams (including the shake roof which…well, was a very tough sell!)  he would NOT, under any circumstances have a thing to do with any poop scooping.  The man does not swim in water where he can’t see his feet or remove spiders or other critters from the premises and he doesn’t care what anyone thinks about it! He is adamant and I knew it would be my job to keep the girls clean!

I began by doing my research.  I found what I needed over at Tilly’s Nest, an awesome blog about caring for backyard chickens, among other things. Since my coop is only two weeks old I didn’t have to do a deep cleaning yet, but I’m sure glad I knew to equip myself with a five gallon bucket. I tried using a shovel but it would have taken a million trips to empty the run of the soiled shavings without that bucket!

The first thing I learned was that cleaning the area under the roost was harder than it needed to be. We put screen there but then didn’t want the droppings piling up under the coop and attracting flies, etc., so we added a piece of plywood and an old cookie sheet on top of the screen.  After trying to scrape droppings off the screen and the plywood and the cookie sheet ,we just decided to extend the plywood floor throughout the whole 4×4 coop floor.  With two coats of good enamel paint the shavings brushed right off and into the bucket.  Cleaning it took all of 10 minutes! 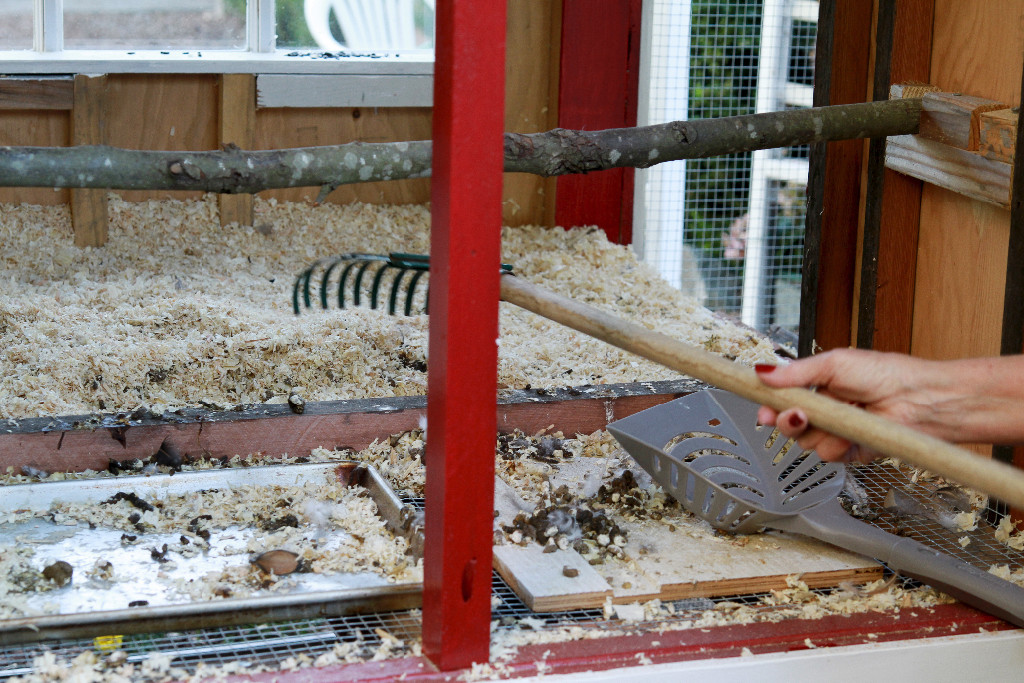 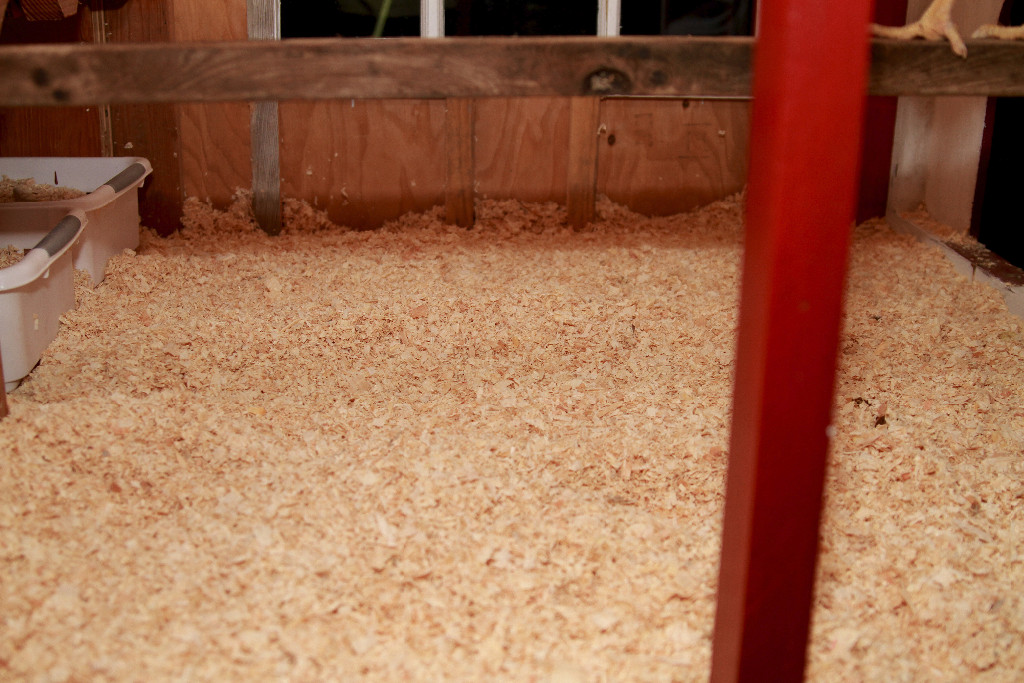 Now on to the outside! The run is 4 ft. wide and 10 ft. long. When the girls came we spread a 2″ layer of pine shavings all over the floor. I raked it after the first week and though there were some flies there was no smell and the shavings seemed to dry things up so the girls weren’t walking through a mess. We probably could have waited another week or so to clean it out but it seemed better not to add more shavings and then have more to scoop out later! (We’re also hosting a BBQ on Labor Day to thank our friends who donated left over wood for our coop and I wanted it looking good!)  Though I had to haul 8 five gallon buckets full of shavings out of the run it didn’t take long and wasn’t hard. Scraping the shavings into the bucket with a small rake was far easier on the back than trying to shovel it out!   Because it was getting dark we decided to wait until daylight to add the new shavings so we can see if all the poop was scooped! But, it looks pretty clean! 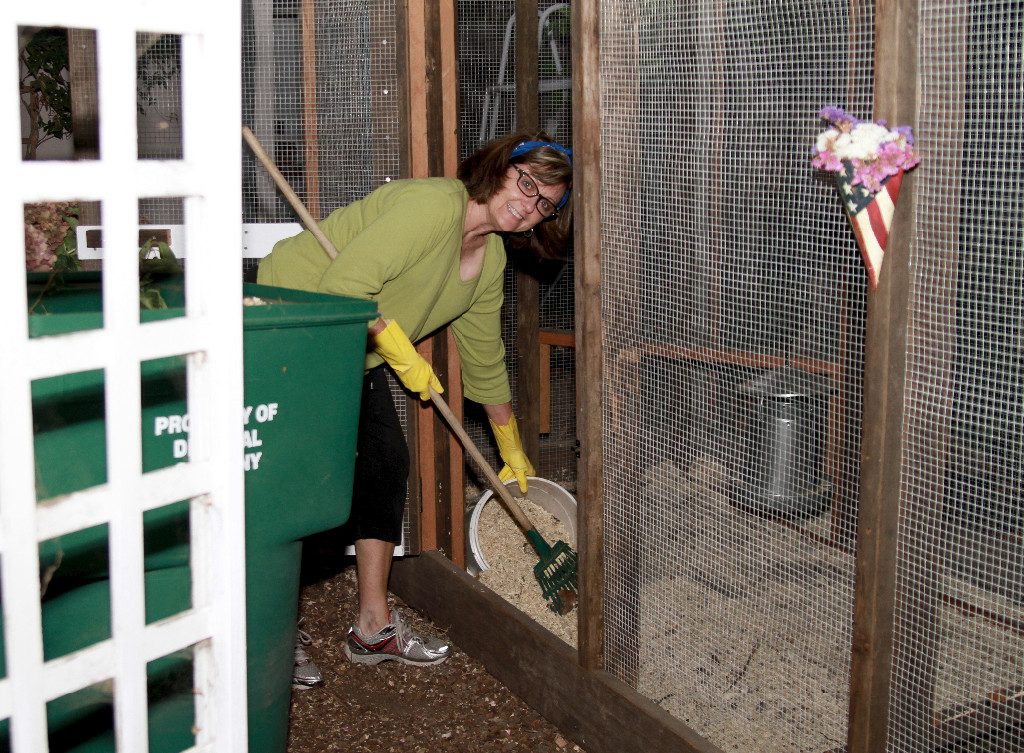 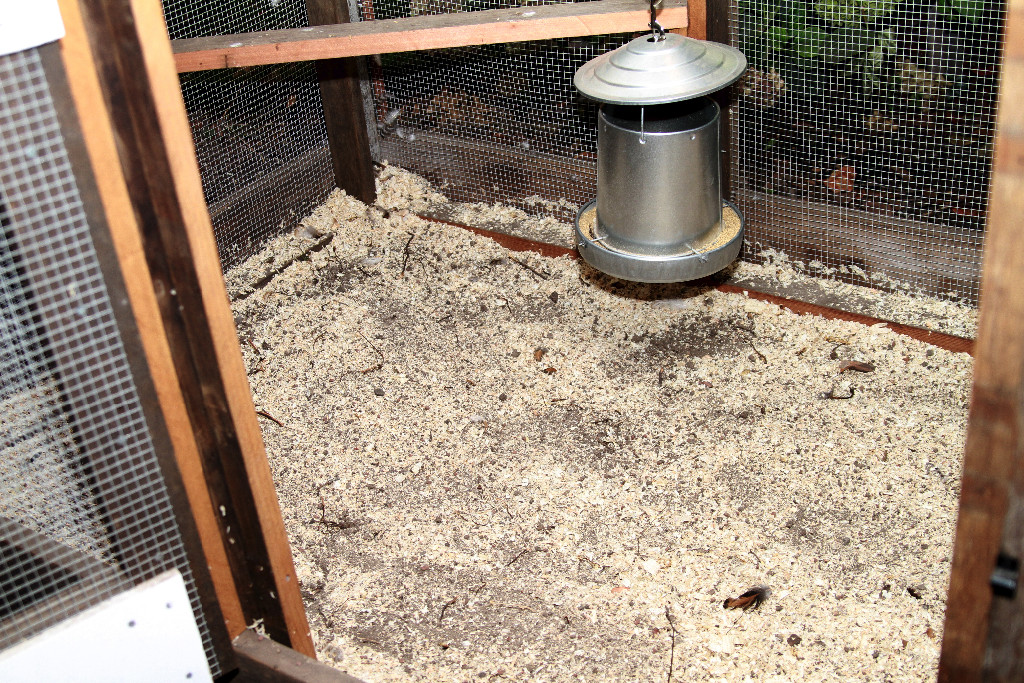 As I finished, I decided to  check on the girls in the coop.  I’d read that chickens are nearly comatose when they fall asleep…it’s true.  The same girls that run from me every time I get near them during the day let me touch them and just sat there staring at me! Normally they jump up and take off pronto! 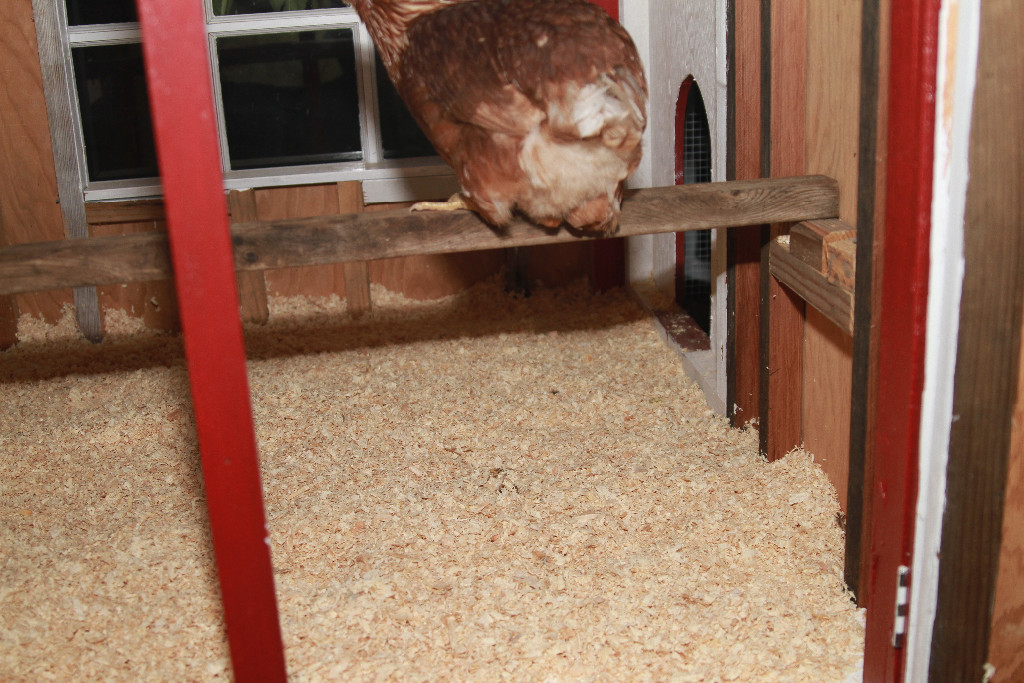 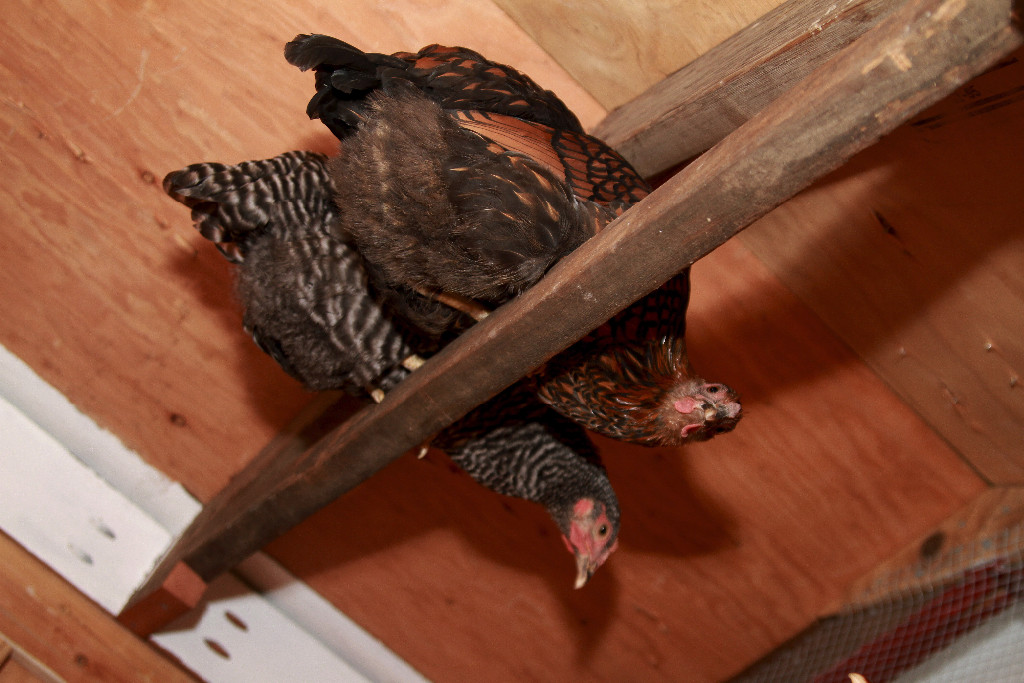 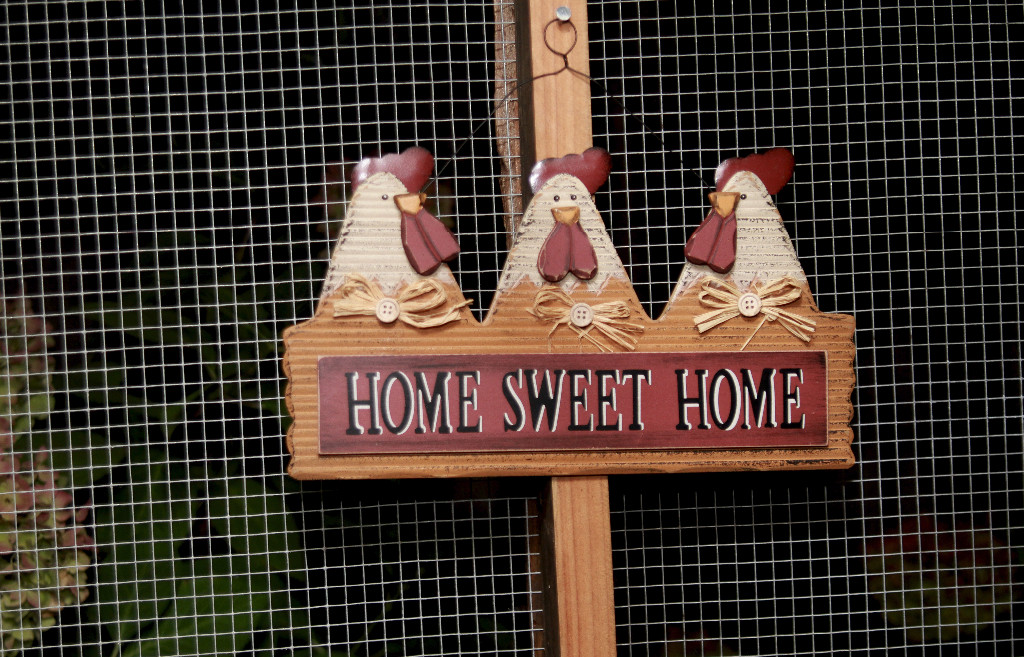 Now that the coop and run are fresh and clean I guess I’ll go back to my daily time of trying to make friends with the girls.  Every morning and every night after work I go out and sit quietly, offering a watermelon rind or a few grapes. Though they don’t run as hysterically as they did at first they’re still very shy and certainly not about to be held! Maybe next time we’ll get chicks instead of pullets so they are used to being touched. On the other hand they don’t rush me and don’t try to escape every time I open the door so maybe I shouldn’t complain! They’re so entertaining they brighten every day!

Thanks to Tilly’s Nest, The City Chicken, Backyard Chickens, The Chicken Chick and City Boy Hens for all the wonderful posts designed to help those of us new to keeping chickens!

(I’m sure there are more good blogs about chickens out there and I’m setting out to read them all! If you have a favorite please let me know! As a former high school teacher I’m a firm believer in getting a first class education about everything!)

← Garden Wisdom – Let Go to Choose the Best!
Crows – Entertainment in the Garden! →