We’ve had our chickens almost a year now and one thing has bothered me since day one.  The water was always getting dirty and I had to haul a heavy container out to dump and clean it nearly every other day. With our drought conditions in California I’d drag it all over the yard to water plants that needed it, not wanting to just dump it out. Something clearly had to change! And then while doing a little web browsing I discovered the Chicken Waterer.

After reading about it on a few different chicken sites, I went to the website at http://www.chickenwaterer.com and ordered one. Best decision I’ve made for the girls since we got them! Instead of a metal or plastic container I have to haul in and out of the run, I used an Igloo cooler I already had in the garage and created a 5 gallon chicken waterer that never has to be lifted out of the run, stays clean and cool and can’t be soiled by dust bath frenzy! Here’s how it works: (And, by the way, I bought mine and I’m only telling you about it because I think it’s a fantastic product! I have no connection to Chickenwaterer.com)

You simply connect the Chicken Waterer to an Igloo cooler like this: 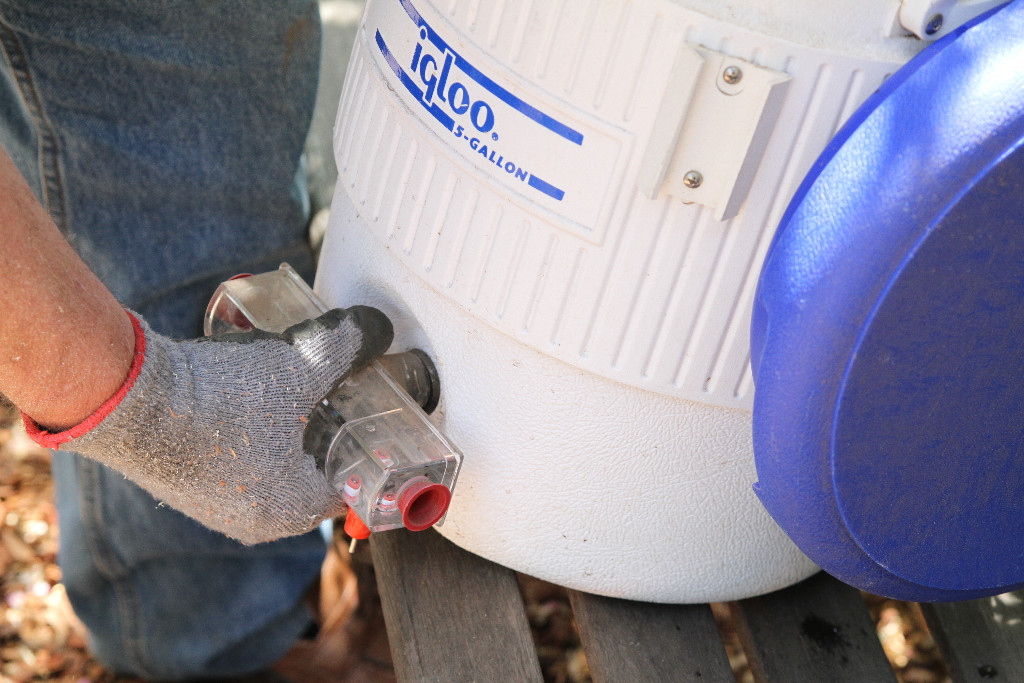 You can lift the lid of the Igloo and  fill it in place which is much easier than dumping and cleaning the other kinds I used: 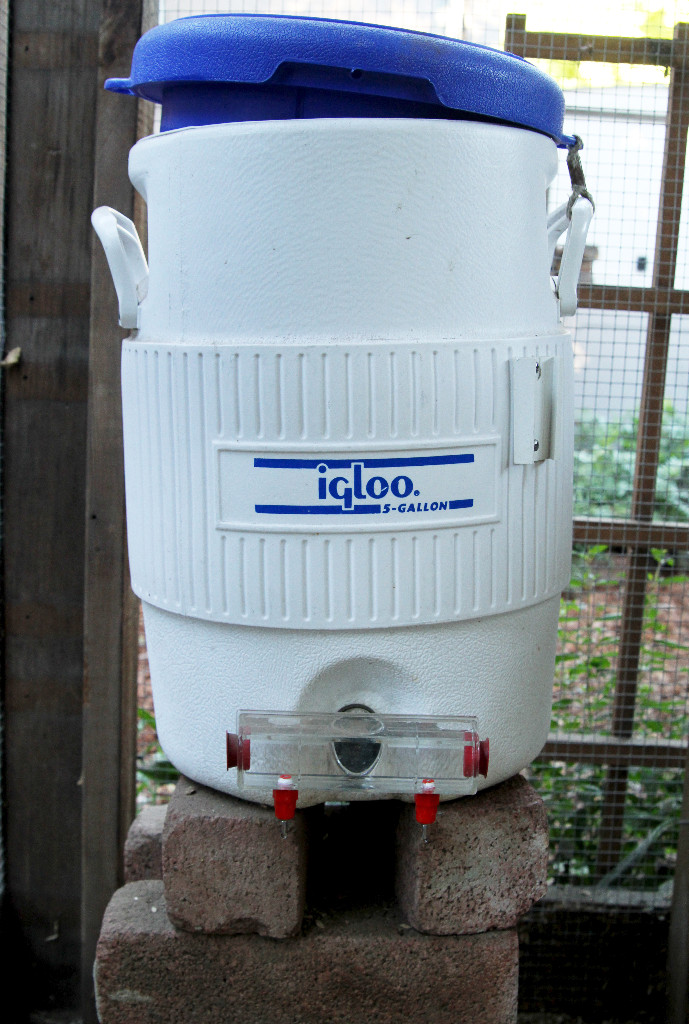 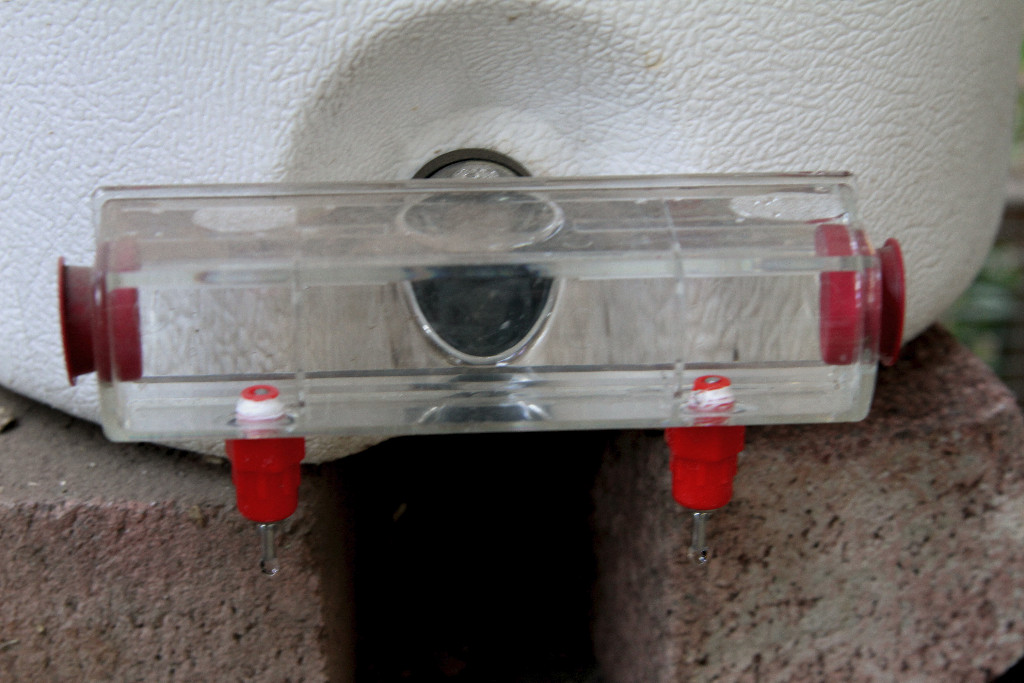 The girls took a while to figure it out just like the instructions predicted. After they had ignored it for a day or so I got in the run and tapped the part they need to tap  enough to get some water in my hand. They came over to check it out and when they realized by hearing the tapping and tasting the water in my hand that it came from this new contraption they took right to it! 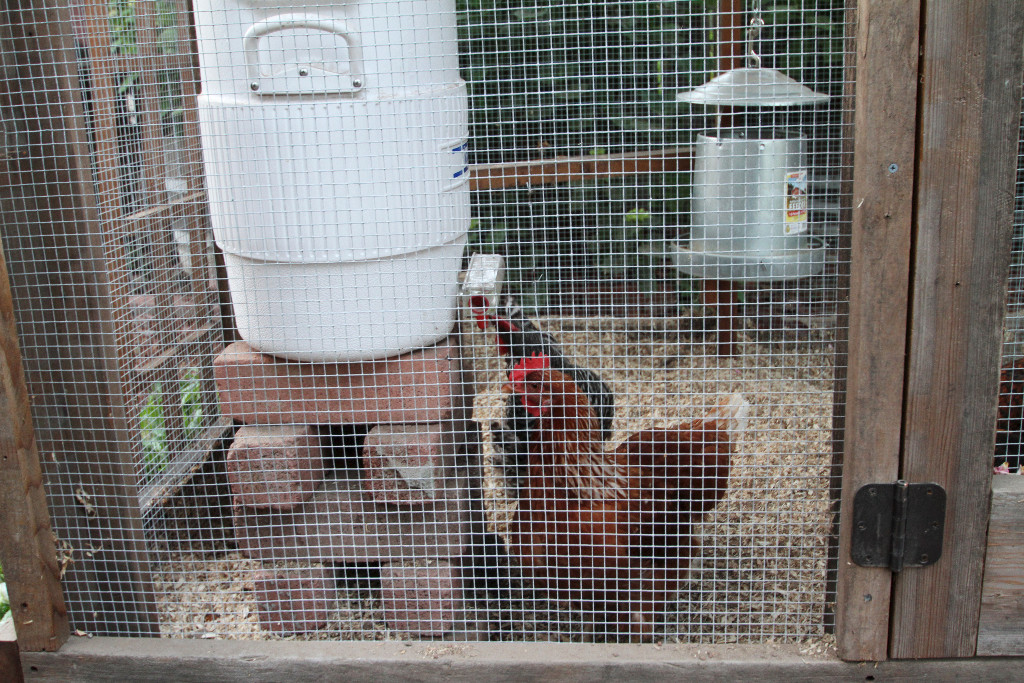 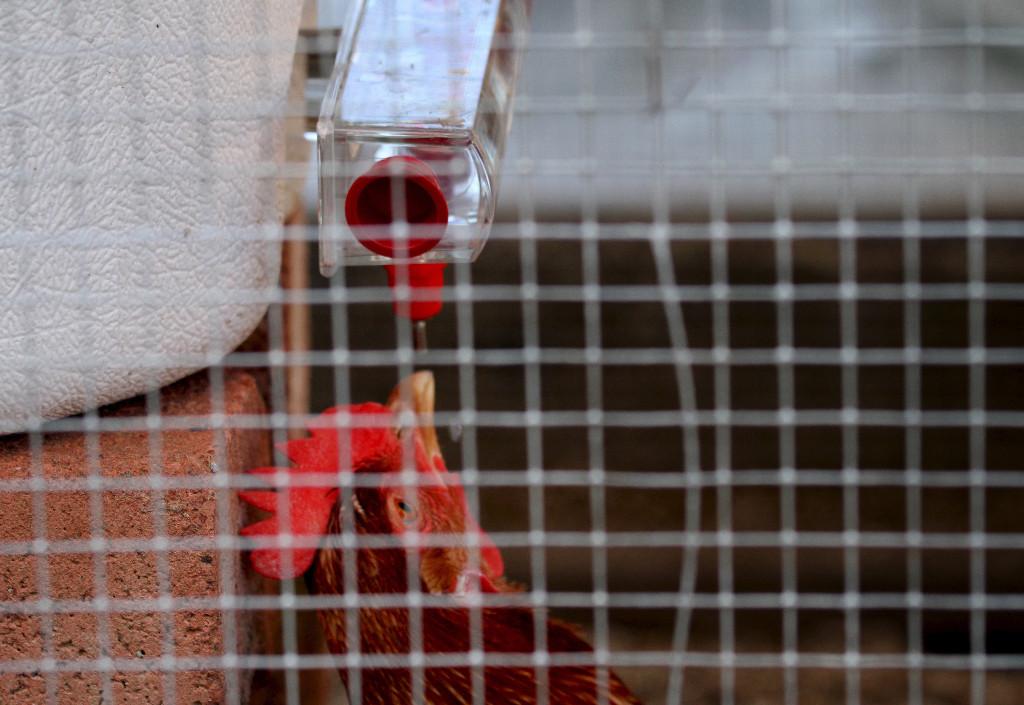 You are supposed to set the water container on bricks or something high enough so they reach up to drink. Well, I can tell you from experience that even if you do that, they will somehow manage to pile up bedding or dirt under the spot where they stand till they have to crane their neck sideways and you need to dig it out a little so they are drinking properly. Why do you have to dust bath right under the waterer girls!

I take a peek inside once a week to see if it needs some refilling and that’s about it! We did have some slight dripping problems so I emailed  the company. Mark, the owner, was an amazing wealth of information and very nice. He actually called me within minutes of my email. If I’d re-read the instructions that came with it I would have remembered that some slight leaking is normal and some Teflon tape added to the part you screw in can help. Mark managed to explain how to fix it without mentioning that I could/should have read that before calling! Like I said, he’s a really nice guy! He explained that parts of it are handmade and occasionally one might leak.  Since ours still leaked a little more than normal even with tape he sent us a new one AND a mailer to return the used one. Amazing service in this day and age! The new one is installed and the girls love it! They have cool, clean water no matter how hot it gets outside, which, last week was 100 degrees! So, I’d say its a product you might want to check out if your girls are kicking dirt in their water and you’re tired of being a chicken maid! Oh, and the old metal waterer makes a great planter! 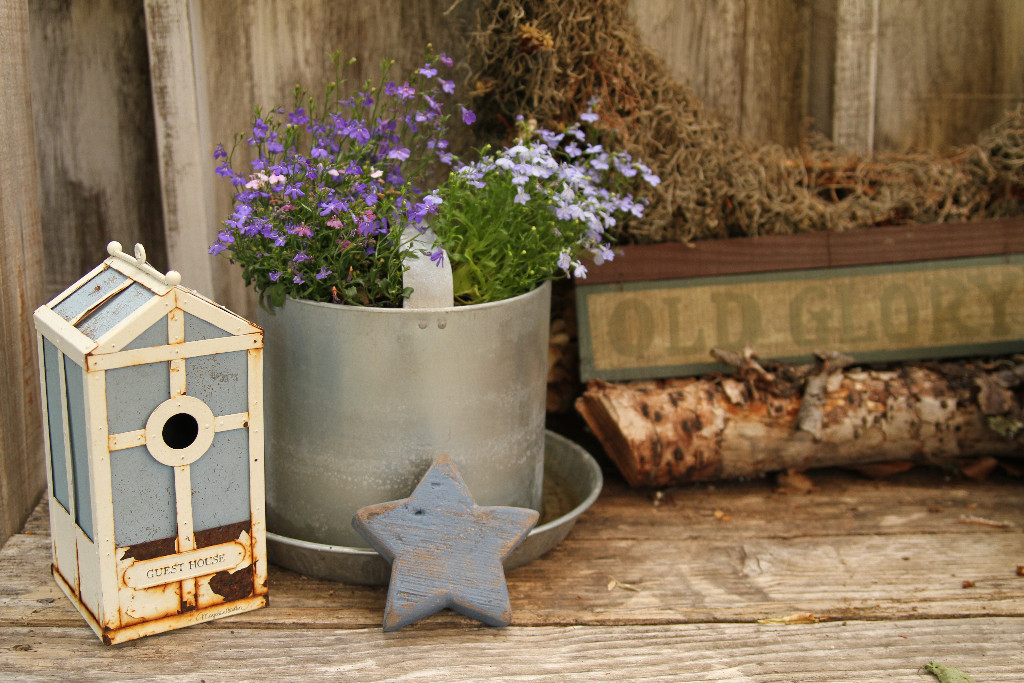 One more thing….you might notice a little green algae inside the plastic water dispenser after a while. It won’t hurt the chickens or the dispenser but if the look bothers you ,it’s easy to clean with a little brush.  Keeping the Chicken Waterer in the shade will help and Mark did mention they are working on a cover to keep the sun out!