Chickens! An Update on “The Girls”! 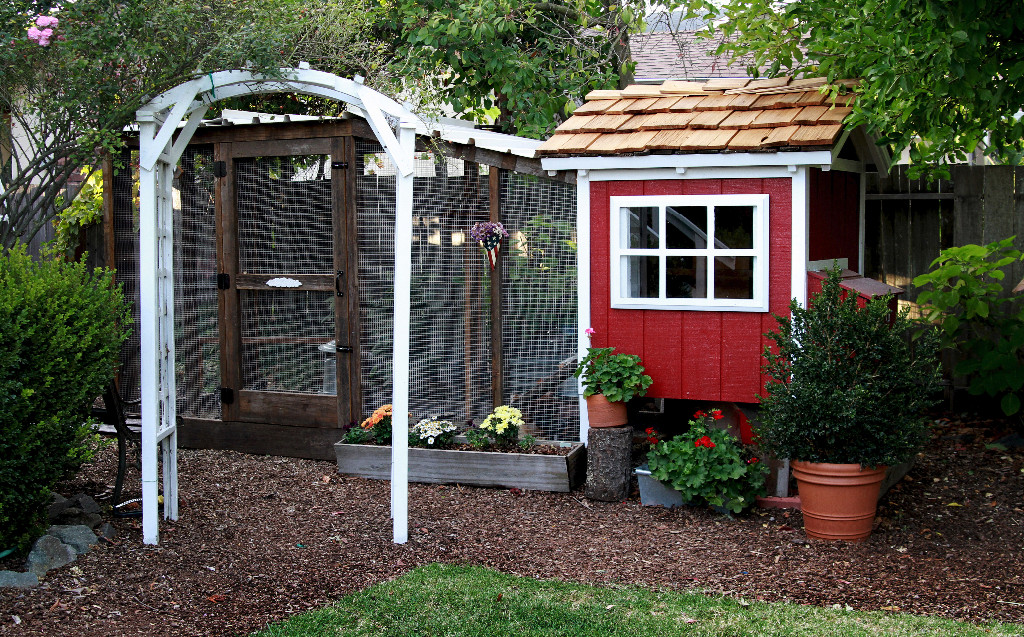 Well, it’s been 10 weeks since we brought the girls home and they’ve settled in nicely! Lily, the Sex Link, has begun laying an egg almost every day! 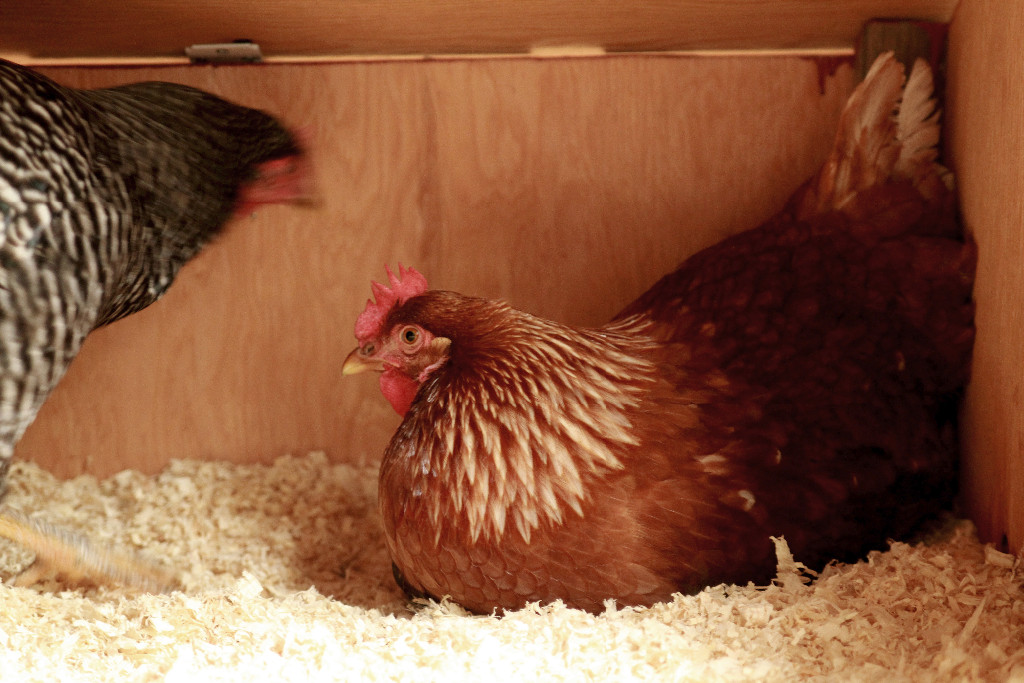 Lacy, the Barred Rock, shown above with Lily, hasn’t started laying yet and neither has our Golden Laced Wyandotte, Lucy.  Their combs and wattles aren’t as developed as Lily’s which could mean they’re a bit younger according to the man at Western Farms .  He also said that different breeds just lay at different times. He added that the Sex Links are the earliest and best layers…and so far he’s right!

Next to collecting the eggs, which is pretty exciting, I love to watch how the other girls act while Lily is  laying! They literally follow her around like they’re “guarding” her. I wanted to get some photos and wow did they NOT like that! They immediately rushed to get in front of  her as if to protect her: 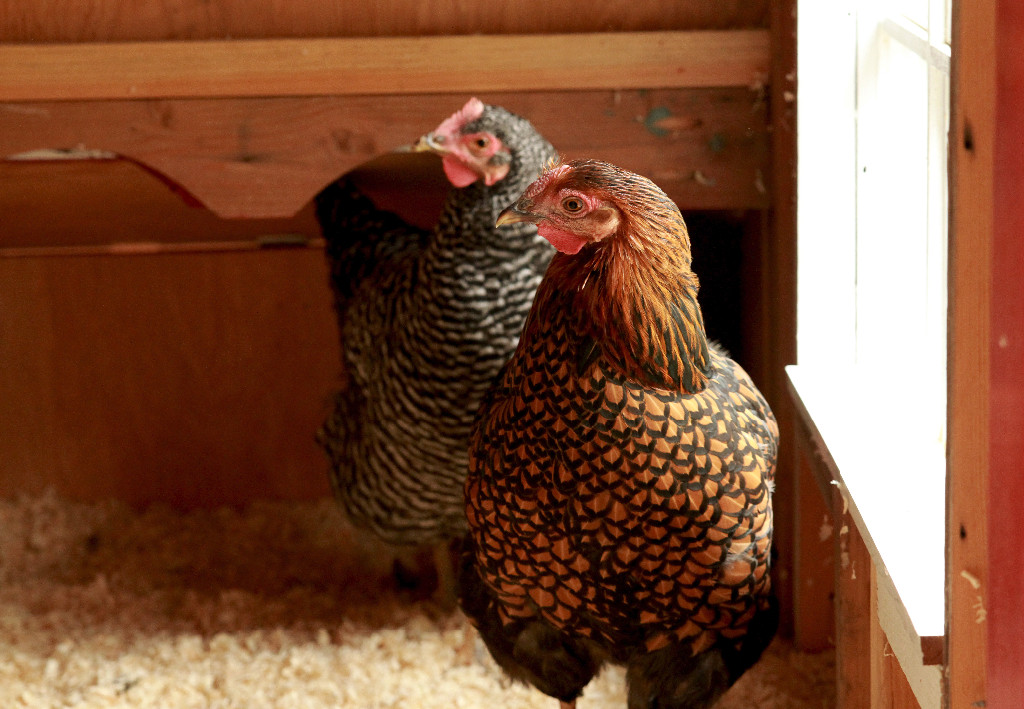 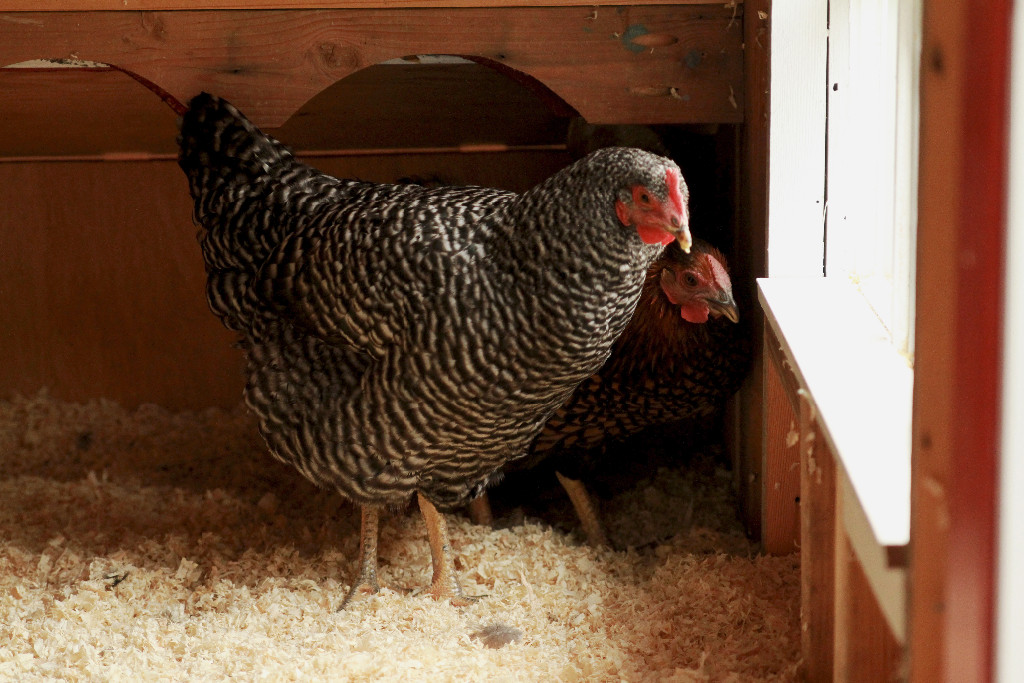 Lacy, most likely the next to begin laying, seems to be the most interested in what Lily is doing when she goes into the nesting box. She gets up close and personal for a look: 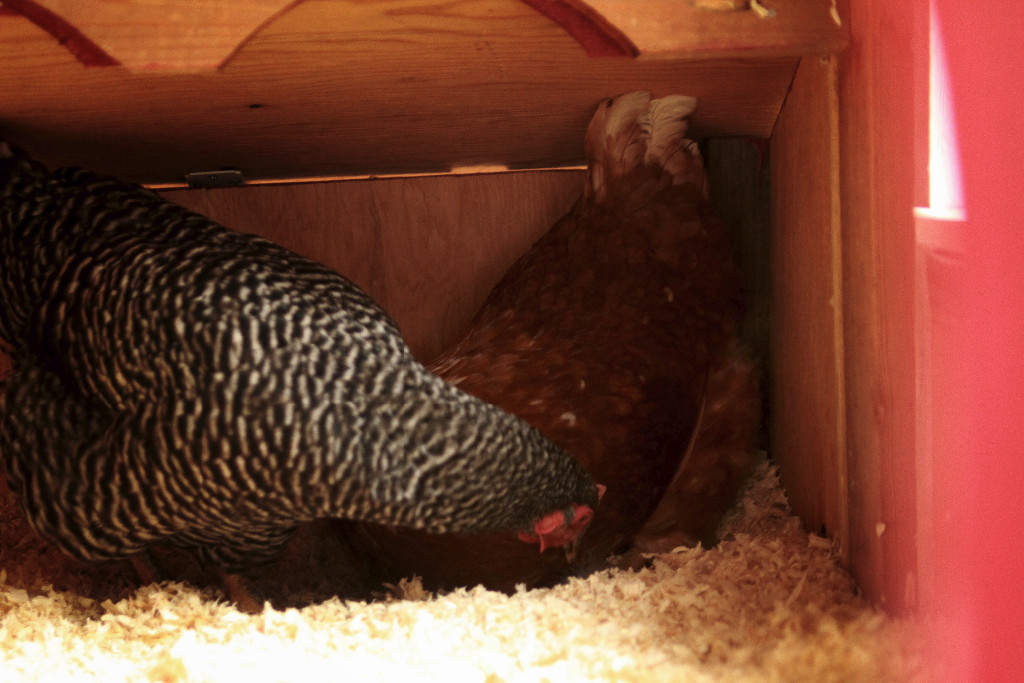 She kept a really close eye on me at the same time…she’s a real guard dog! 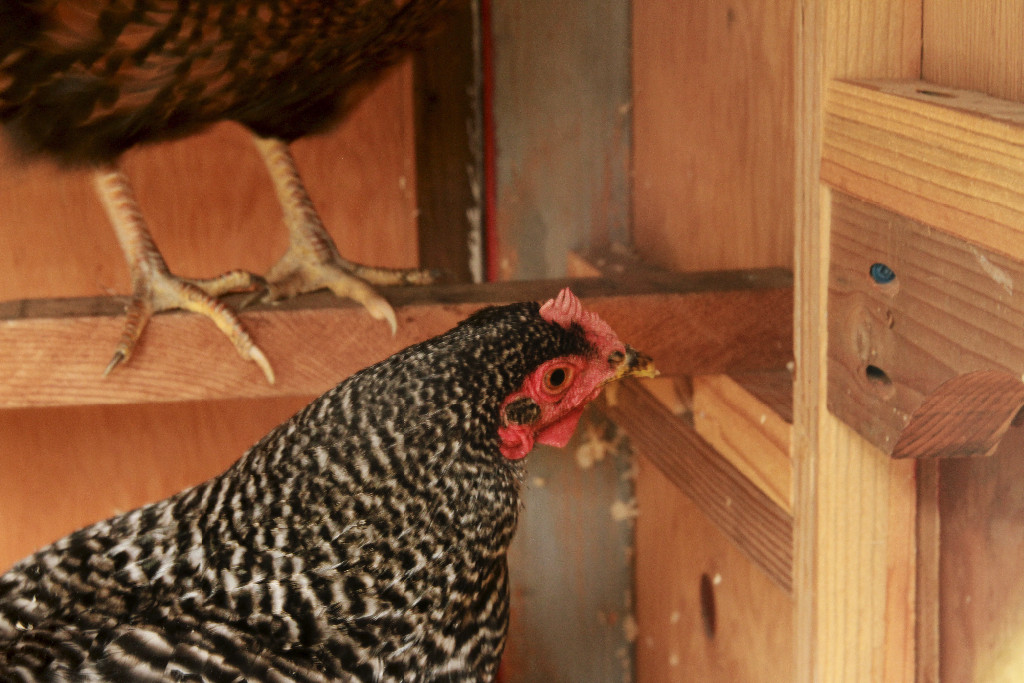 She actually followed me out the door as if to say, “don’t come back!” 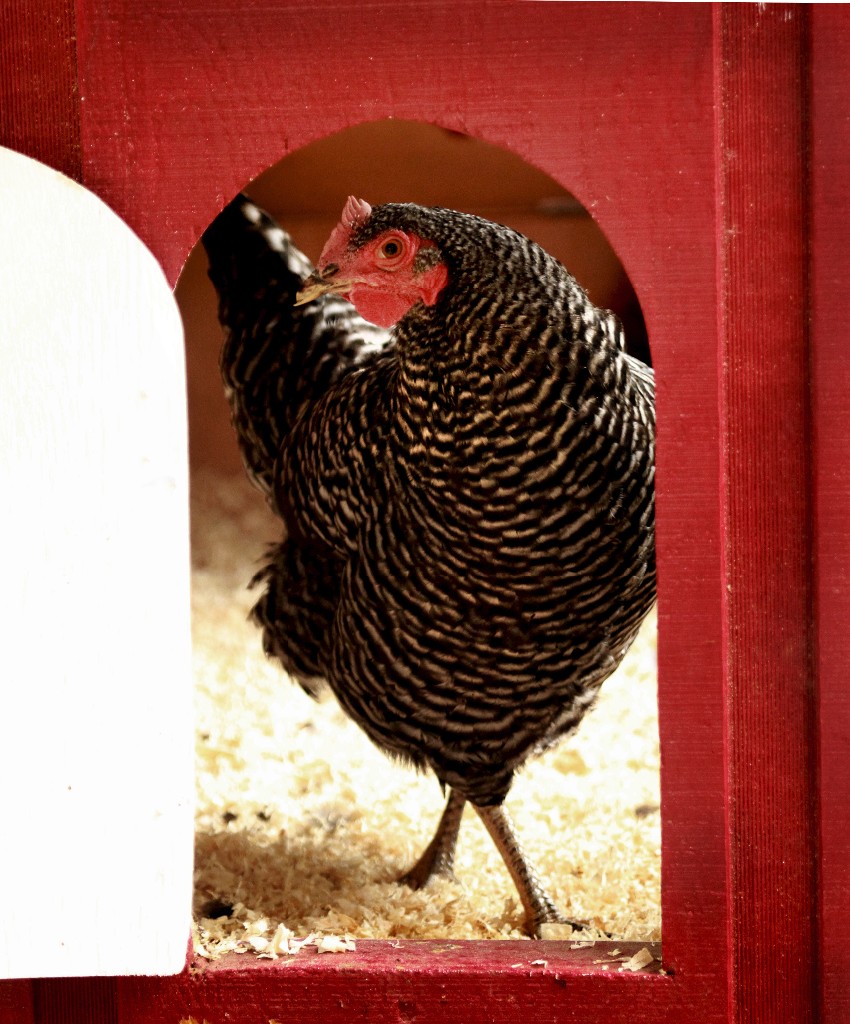 To get back in their good graces I pulled up a few bean plants and tossed them in the run, followed by a little handful of dried meal worms….they’ll forgive anything if they get meal worms! Lily waits by the door every night when I get home from work….she seems to actually know I’ll show up with her worms! I can actually grab some out of the bag without gagging now, which took a couple of weeks!

To keep the coop clean I use a kitty litter scoop to take out their droppings each morning.  They always roost in the same spot so it’s easy to do a quick clean up. That way I only have to clean the whole coop out every two weeks or so. Even then it only takes 10 minutes to scoop out and replace the shavings.

The run is full of pine shavings which quickly dry the droppings so, while I completely replaced the shavings every week in the beginning I’m realizing we can do it only every three or four weeks and there is no smell or mess. They have certain corners where they take “dust baths” every day which throws dust and shavings into their water, so I’ve set it up higher on an overturned clay pot to keep it clean! All in all it’s a pretty easy job to care for the girls! I’m still working on their second huge bag of food and we’ve purchased shavings only three times. Feeling uncomfortable with putting their worms and fruit and green things in the shavings on the floor  for them to eat, I set up a clean tray to use….no way! They prefer to throw everything on the ground and peck it to death, droppings or not!

So, we’re glad we got the girls and it’s been much less work than I anticipated.  John has kept to his commitment to never touch the coop after building it and I don’t even mind! They have such personality and seem to care about each other…..we just love them!  Get chickens….you’ll love it! 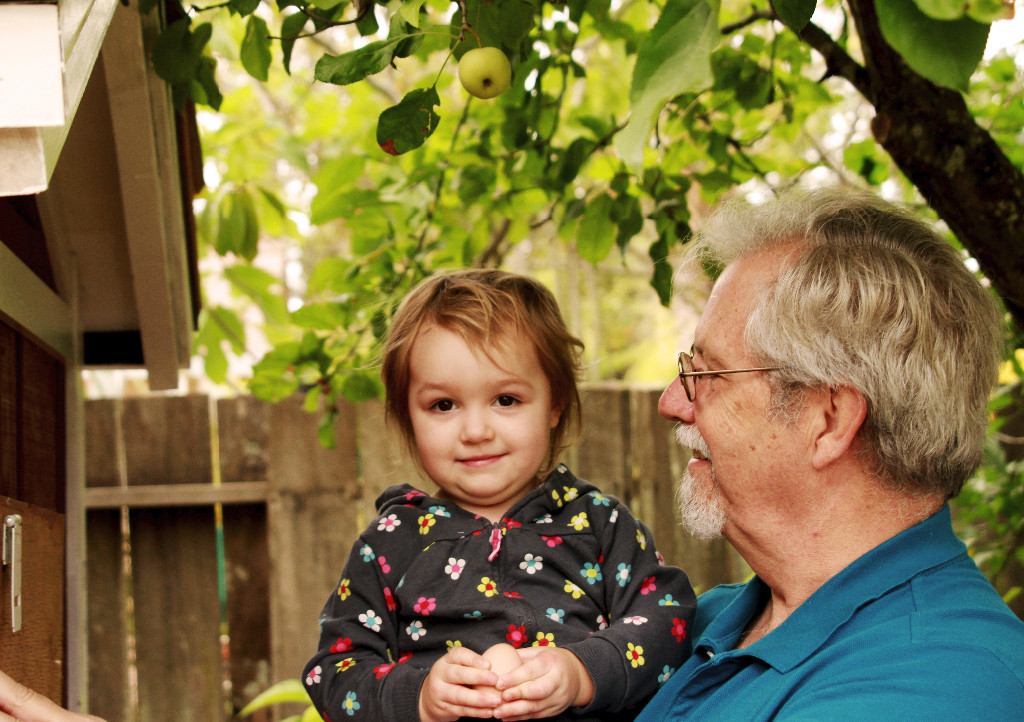 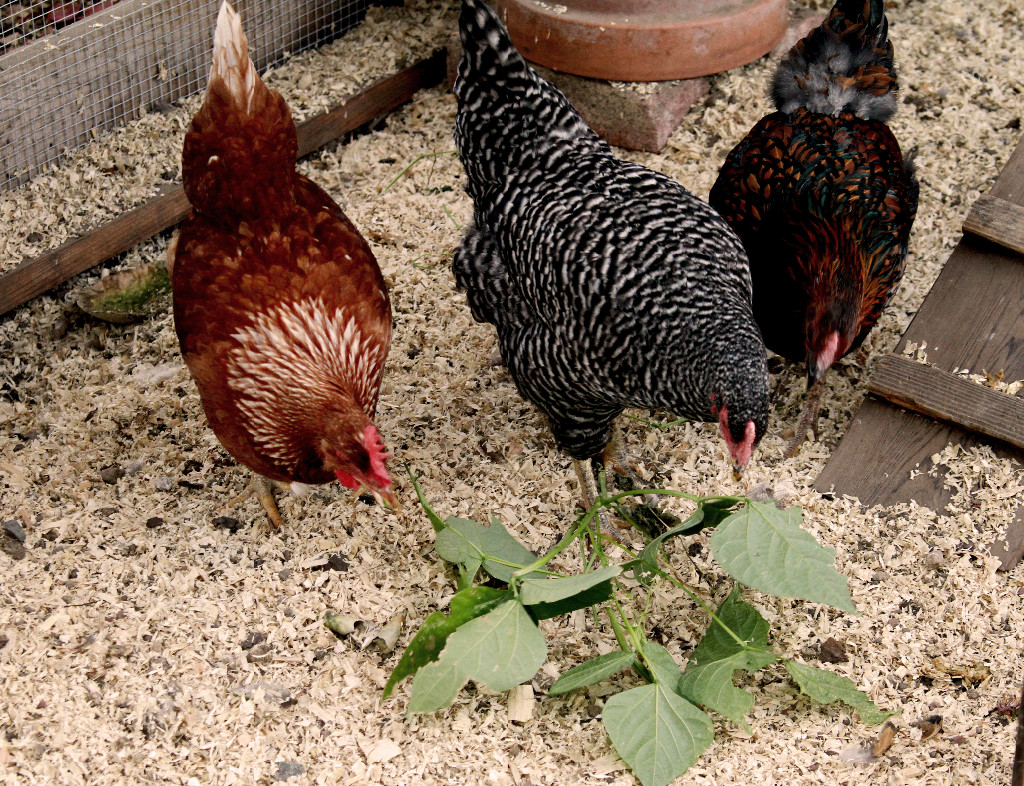 And so will your kids or grand kids!

← Succulent Nursery…Lone Pine in Sebastopol!
Crate and Bloom …..Check this Out! →

4 Replies to “Chickens! An Update on “The Girls”!”